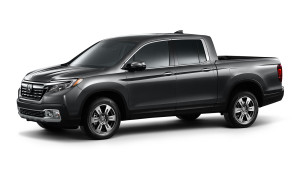 The 2017 Honda Ridgeline debut is expected for the spring of 2016. Finally, Honda is ushering in the grand return of mid-size pickups for drivers who want practical, yet tough performance. The Ridgeline drives like a car, but has the premium power of a truck. We have the details you need to know about the upcoming Ridgeline at Tamaroff Honda.

We are still waiting for Honda to tell us about the Ridgeline engine, but we are expecting something similar to what the Honda Pilot SUV has under the hood. The 2016 Pilot has a 3.5L V6 engine 280 hp and 262 lb-ft of torque, and it can tow up to 5,000 pounds. We may also see similar fuel economy figures as the Honda Pilot.

The Ridgeline is designed as a mid-size pickup, so it is versatile enough for everyday driving and powerful enough for tiring tasks. The seats fold in the back of the vehicle, so you can fit extra items in the cabin. In fact, there is enough room to pack big items underneath the seats. Stow bikes and tents in the Ridgeline with ease before heading off to a camping adventure.

In the cargo bed, you can enjoy the convenience of built-in trunk storage. The trunk is large enough to hold ice, drinks, and snacks. This is a great addition to tailgating trips during sports season. The trunk will also lock, so it’s a great place to secure important items. The tailgate has the capacity to flip down and sideways, so you can move large items the most convenient way possible.

You can always enjoy great tunes in your Ridgeline. The bed will have a built-in audio system, which is a class exclusive! Pick your favorite music and stream with the help of Bluetooth. You can adjust volume and select songs without entering the cabin.

Ready for the Adventure?