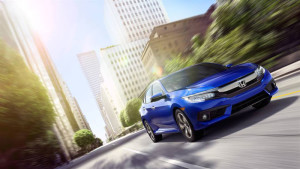 Music and motoring reunite once again in 2016 for the annual Honda Civic Tour, this year commemorating its 15th anniversary.

Honda continues its ongoing support of music with this anticipated yearly tour, which again brings some of the music industry’s hottest performers to stages across the United States.

The Honda Civic Tour debuted in 2001 and has been headlined by such powerhouse acts as blink-182, Maroon 5, Linkin Park, Black Eyed Peas, Fall Out Boy, and One Direction, which headlined the 2015 tour.

This year, the Honda Civic Tour will feature two of the pop industry’s biggest stars: Demi Lovato and Nick Jonas.

In addition to performing throughout the country as part of the Honda Civic Tour, Demi Lovato and Nick Jonas have each designed their own Honda vehicles, which will be on display at every tour stop and then taken home by two lucky fans at the end of the tour.

Demi Lovato has designed a 2016 Honda Civic Sedan that features a matte black and rose gold exterior, which she autographed live during the Honda Civic Tour press briefing in New York. Nick Jonas has designed a Honda Grom motorcycle, with exterior coloring of titanium and dark green that was inspired by a 1940s European military watch.

About the Tour’s Namesake

The Honda Civic is one of Honda’s most popular cars, having been introduced to the automotive market almost 50 years ago. The 2016 Honda Civic continues the legacy of exceptional Civic quality, offering sculpted good looks, an impressive list of accolades, and a host of prime amenities.

Highlights of the 2016 Civic include:

Drivers can learn more about the outstanding 2016 Honda Civic and take it for a test drive by visiting or contacting Tamaroff Honda.

Ticket information and other details about the Honda Civic Tour can be found on the tour website.