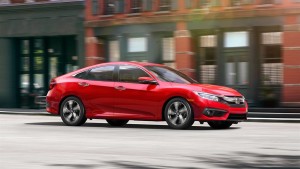 Reviews of the 2016 Honda Civic are in, and they’re just as positive as the opinions of drivers from Detroit, Farmington Hills, and West Bloomfield. This is the Civic’s tenth generation, so everyone expected something special, but even the highest industry expectations have been surpassed.

“Inside and out, the car gives the impression of being bigger than the specs would indicate.” – Car and Driver

Reviews of the 2016 Honda Civic were unanimous in their appreciation of its spacious dimensions. The vehicle is actually 3 inches longer and 2 inches wider than its predecessor, so you’ll enjoy the tight, agile ride of a compact while benefiting from the roominess of a full-sized sedan. There’s also a stunning range of features filling that space, including a 7-inch touchscreen with Apple CarPlay® and Android Auto™ functionality.

“Like the best Civics of yore, the new one feels sporty and fun when you’re driving it on winding back roads.” – Edmunds.com

The 2016 Honda Civic is built around two all-new powertrains, so you’ll receive state-of-the-art performance. The standard 2.0L generates up to 158 hp and 138 lb-ft of torque, while the optional turbocharged 1.5L offers 174 hp and 162 lb-ft of torque. Even better, you’ll enjoy stunning fuel economy with either engine.

“The Civic’s very design offers an added measure of safety.” – The Car Connection

Families from Detroit, Farmington Hills, and West Bloomfield love the peace of mind that comes with the 2016 Honda Civic. Its ACE (Advanced Compatibility Engineering) body structure is able to direct impact energy away from occupants, but there’s more to it that that.

Standard safety features include a multi-angle rearview camera, stability control, and anti-lock disk brakes, with the advanced driver-assistance features of the available Honda Sensing package including:

The 2016 Honda Civic reviews reflect praise from throughout the automotive industry, so there’s no doubt that this is a real favorite across the country. To experience it for yourself, just visit Tamaroff Honda. We proudly serve drivers from Detroit, West Bloomfield, and Farmington Hills, and we hope to see you soon!